Roboto put the laser gun on his mechanical arm. A signal tone confirmed the correct locking of the weapon. The charge LED on the cannon lit up. Robotos’ visor closed. He walked out of the room with quick, precise steps. It was time for an inspection. Due to sickness at Teela’s palace guard, the mechalectric warrior had agreed to take over a watch.

Roboto stepped through Eternis’ city gate. The jungle began right in front of Eternia’s capital. Roboto walked along the palace walls. As he walked, the mechanical wheels turned in his transparent body. Suddenly he heard a sound. It came from the forest. Roboto slowly moved toward the edge of the forest. Suddenly pincers gripped the weapon and tore it off Roboto’s mechanical arm. Electrical sparks flashed as the cannon fell to the ground. At the same time, a second set of pincers grabbed Roboto’s other arm.

The mechanical warrior wanted to tear himself away and drove his energy supply to Maximum Mode. This should triple its power. But his opponent was faster. And now came to light. Two heads emerged from the forest. Eight legs. Four arms. It was Multi-Bot, the Demon Robot of the Evil Horde.

“We have you,” shouted two mechanical voices at the same time. Both of Multi-Bots heads were talking at the same time. While Multi-Bot still held Roboto with pliers, the mechanical monster separated into two halves. The second half moved directly behind Roboto. He took a scanner out of his pocket and put it directly on Roboto’s helmet. “Sleep well,” laughed Multi-Bot. Then a blue flash went off the scanner. Robotos circuits were blocked and his system was forced to shut down. He could do nothing. Roboto was offline.

– – – Standby. – Reboot. – These status lines appeared in Robotos visor. His system had started again. When his system was booted in safe mode, he turned his head slowly. He was in a laboratory. Within the Fright Zone. In the fortress of Hordak‘s troops it looked gloomy. Decayed boulders and a weathered old tree at the summit of this old fortress came into Roboto’s sight.

Roboto wanted to get up. But what was that? He looked down at himself. There he saw … nothing. His mechanical arms and legs were dismantled. Right in that moment, Multi-Bot came into the room. “Well, you’re awake,” he snapped. “Good. Now tell me your secret.” Roboto looked at him questioningly:”My secret?” The expression in Multi-Bots two faces darkened. He continued angrily, “The secret of your heart and soul. Who gave that to you? What made you more human? I must know!”

Roboto looked at the multi-monster. So this is why Roboto was here. Multi-Bot, himself a robot, wanted to become more human. Interesting, Roboto thought. Probably an evil demon robot like Multi-Bot wanted to use his knowledge so that he could better assess the tactics and the behavior of humans. This would give him an advantage in the fight against the heroic warriors of Eternia.

“Never,” Roboto said resolutely. Multi-Bot was beside himself. He immediately came up with saws, drilling machines and laser welders. He assembled one piece after another from Roboto. Roboto noticed how his energy level went down. His system was damaged. He would not last long.

Multi-Bot continued to dismantle Roboto. He took off the gear wheels in the innermost part, unscrewed the multiprocessors and took off Roboto’s visor. Now the robot man could not see anymore. “Tell me,” Multi-Bot shrieked. “Otherwise, I’ll destroy you.” Roboto remained silent. Furiously, Multi-Bot tore out the mechanical heart from Roboto’s torso. Robotos’ energy system sank to 11 percent. His internal warning system alerted him. “Tell me!” Multi-Bot was beside himself. He scanned Robotos’ skull with an ion microscope. He continued to tear out parts.

“Well, your choice.” Multi-Bot looked at Roboto, then pulled his main processor out of Roboto’s head. Robotos system collapsed instantaneously. “Roboto is dead. Behaved like a human till the end.” Multi-Bot laughed mockingly and left the lab.

In the king’s palace the excitement was great. Roboto had not returned from his watch. The royal guards searched the surroundings of the capital until late into the night. With a Wind Raider, Sy-Klone flew over the forests, a searchlight lit the forest below him. Extendar drove out his bionic limbs. He was so tall that he could look over the tops of the trees. But even that did not reveal the missing friend.

But Extendar saw something different. In the distance something approached. It spun around its axis and smashed the surrounding trees with its tong arms . The face, if one could call it so, looked like a devil’s face. It was Monstroid, the Evil Horde’s transportation vehicle. Monstroid came closer. Teela, the guards, Extendar, and Sy-Klones gathered in front of the city gate to protect it. Monstroid came closer. The turbine drive of the vehicle caused deafening noise. A few meters in front of the city gate, it suddenly came to a stop.

“A delivery for you!” The sentence came over a loudspeaker from the innermost part of the vehicle. It sounded like the murmuring voice of Mantenna, the stalk-eyed Horde fighter. A flap at the front of the Monstroid opened. An arm fell out of it. A mechanical. Wires, sensors and micro chips followed . Everything fell on the dusty ground. Then the rest of Roboto followed. With wide eyes, Sy-Klone, Teela and everyone else stared to the parts lying in the dirty ground. Mantenna’s demonic laughter was heard over the loudspeaker. Then Monstroid turned around and drove back with deafening noise. Then there was silence.

“Quick,” exclaimed Extendar. “Bring him to Man-at-Arms.” Soon after, Roboto’s parts were played in the weapons masters’s lab. He was also shaken by Roboto’s condition. “The processor is damaged. No activity from the battery. No activity in the neural network as well.” Man-at-Arms was silent. Then he said softly, “I cannot activate him. Roboto is dead. “Silently, he installed all the parts back ontoRoboto, knowing that this would not restore his mechanical friend. Then he went out of the lab.

Man-at-Arms told Prince Adam what had happened. The prince looked at him. Without a word, he turned around. He had an idea. The power of Grayskull was strong. It was worth a try.

The prince went to Man-at-Arms’ laboratory. There lay Roboto. It hurt Adam to see how his loyal friend and companion had been treated by the Horde. Ascending rage repressed the pain. Adam drew his Sword of Power. He looked around. Nobody was there. He put the sword on Roboto’s chest. Then he took a step back. He begansaid, “By the power of Grayskull!” The sword glowed. The light turned into a glimmer. The space was filled by a rays. Adam continued, “I have the power!” He took another step back. Never before had he pronounced the formula of power without holding the sword in his hands.

Nothing happened. Adam was waiting. Still nothing. He was about to take the sword back, then he saw something: one of the gears in Roboto’s body began to turn slowly. Just a bit. Hardly perceptible. “Come on, old friend,” Adam whispered. As if Roboto had understood the prince, the other gears began to turn. Then he heard something. The sound of electricity! Roboto’s arm moved. Then, the foot. Roboto booted his system. “Ready” said a voice. Roboto spoke. And he openedhis visor. “Friend!” said Adam. He took back his sword.

Roboto looked at Adam. Slowly he said: “I — am — back.” Adam nodded and smiled. At that moment, Man-at-Arms and the other defenders of Eternia came into the lab. They looked at Roboto happily. “But how?” asked Man-at-Arms. Adam looked at his sword and Man-at-Arms understood. He knew the prince’s secret.

Roboto stood up and went straight to the armory. He took the double-axe extension  from the arsenal and mounted it on his mechanical arm. Sy-Klone looked puzzled. “Friend,” he said. “You have to rest.” “No,” Roboto said. “There is something I have to take care of.”

In the Fright Zone, Mantenna told of his story of how he went to Eternis to deliver the parts of Roboto. Leech, Dragstor and Grizzlor laughed loudly when they heard the story.  Suddenly they heard a loud sound. The Fright Zone tree of evil crashed to the ground right next to the. Their eyes went up. Up there, where the mighty tree of evil had stood now towered Roboto. His axe had just turned off. With it, he had cut the tree within seconds. Robotos’ visor closed. “You !” shouted Multi-Bot. “That cannot be. I destroyed you. Destroyed. You cannot exist anymore.” Just as he had moved froward to attack, Sy-Klone and Extendar emerged behind Roboto. Sy-Klone began turning his tornado function on and thus created a mighty vortex. Extendar stretched until he had reached the three-fold of his height and opened up his deflector shield. Multi-Bot stopped. “Attack them,” shouted Mantenna.

Multi-Bot said to Roboto: “What is it you want? Revenge?” For a robot, his voice now sounded rather scared. Roboto approached him. He came very close.  Roboto raised his visor. His view sensors scanned the eyes of Multi-Bots heads. Quietly he said:”You are looking for the secret of my life. For the reason I have a soul. A heart. Why I live. You have not found anything, because you cannot see these things. They can only be created by the power of good. This is what once turned me human. You will never ever get there.”

Roboto turned around and left he Fright Zone. Sy-Klone and Extendar did the same. Mantenna, Leech, Grizzlor and Dragstor looked up at the hill behind the Fright Zone. He-Man had also disappeared. They looked relieved. Multi-Bot, however, hissed contemptuously and looked down at the tree of evil that lay before him. Lifeless it was. Like himself. He would never be more than just a mere machine. 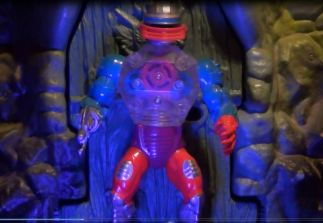 This story was originally published by me in German on February 25th, 2017. Read it here.

Read my other MotU fan fiction short stories:
FALL OF THE GOOD: A Masters of the Universe Short Story

THE FROZEN SWORD: A Masters of the Universe Short Story

This is the (fantasy) work of a Masters of the Universe fan. Tributing the FILMATION animated series and the German EUROPA audioplays. Out of pure love for this fantastic concept called HE-MAN AND THE MASTERS OF THE UNIVERSE. Find out more about my MotU-related work in this blog section. 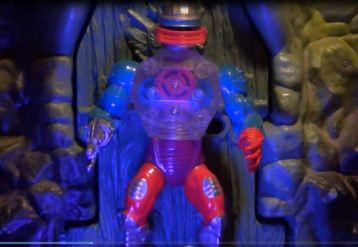 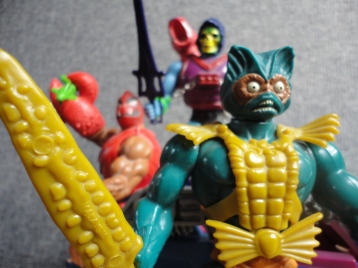 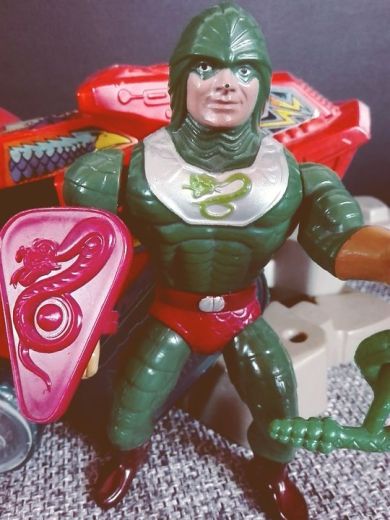 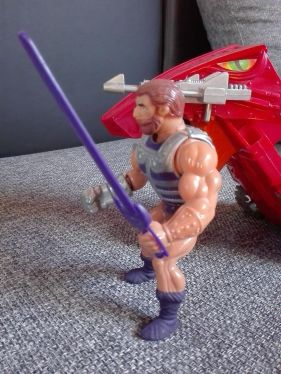 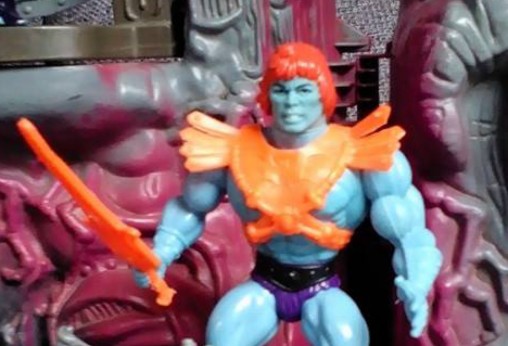 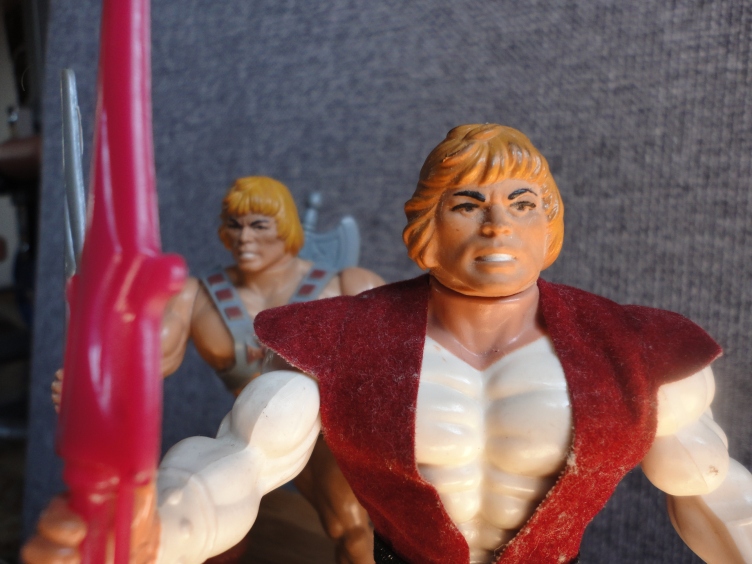